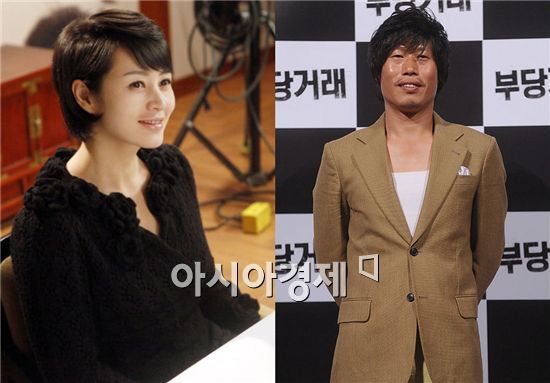 Top actress Kim Hye-soo and actor boyfriend Yu Hae-jin have ended their three-year relationship, according to the two's agencies on Monday.

Officials at GF Entertainment, representing Kim, and Sim Entertainment, managing Yu, confirmed a report from earlier in the day which broke news of the split-up while adding they had not been able to ask into details such as why and how it happened.

Industry sources speculated however that the two became distant due to their busy schedules since the latter half of late last year and differences in opinion regarding marriage.

During an interview with the press in November 2010 for her film "Home Sweet Home," Kim had said, "I'm not a celibate nor do I have any illusions or fears regarding marriage. I plan to marry when I really want to but it's not something I feel strongly about yet."

Also, a source close to both actors said, "Just like any other couple, they saw conflict which arose from their differences in personalities...... Yu was considering marriage but Kim had no intentions to so they probably had different views on this as well." Fans had looked forward to the two getting married with both actors being in their early forties and having presumed to be in a strong relationship based on their long-lasted friendship; they had become acquainted after their first movie together in 2001 titled "Kick the Moon" and worked together again in 2006 hit film "Tazza: The High Rollers" which won Kim the award for best actress at the Blue Dragon Awards.

Then rumors of the two dating surfaced starting 2008 although both continuously denied any romantic involvement until early last year when paparazzi photographs of the two were released.