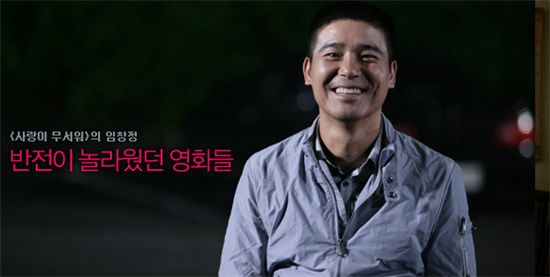 Just an ordinary guy. Paradoxically, this is the image the public has of the man who has produced numerous hit songs and starred in quite a number of successful films. Throughout his many roles, whether he was the head of a school's gang who kept boasting about fighting 17 guys alone ("Beat," 1997) or a baseball umpire who finally captures the heart of a beautiful actress ("If Sun Rises in the West," 1998) or a college student who endures a muscle-flexing competition to impress his crush "(Sex is Zero," 2002), one thing that remained a constant factor was that he was always wearing the face of the guy next door who is unlikely to stir the world. So he was always No. 1 on the list for castings whenever there was going to be a film about a not-so-smart ordinary guy who unintentionally gets caught up in certain crazy events.

His latest movie “Shotgun Love,” (2011) that premiered on March 10, too begins with that all-too-familiar image. The character Sang-yeol who has spent a night with a woman he was secretly in love with and struggles to keep up that flame, is basically an adult-version of college kid Eun-sik from his previous film “Sex Is Zero.” “Sang-yeol is a lot like the other roles I played in the past and ‘Shotgun Love’ is also similar to my other romantic comedies,” said Lim. However he does not bother to deny his image as being 'average' or 'ordinary.' He simply turns into that person to tell the story of ordinary people in his own way that no one else can mimic. “‘Shotgun Love' is a love story of an average guy from everyday life who, after the fateful night with his crush, goes through an ordeal which is harsh and tearful. Sure, there are lots of funny parts in the movie, but the film details on how Sang-yeol manages to overcome that difficult situation. The film also constantly asks just how far an ordinary guy would go to understand and take on the pain of a woman he loves.” So because most of the movies he starred in were always sunny and warm, it was quite a surprise to find that likes thriller films in particular. For those of you who have yet to see the movies introduced below, you can look forward the amazing turnaround at the end. For those who have alreayd enjoyed them, admire the brilliance of the stories one more time. 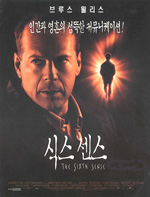 1. "The Sixth Sense"
1999 | M. Night Shyamalan
“I really enjoy watching movies and so I watch them a lot. I go for all genres and directors but my favorite is thrillers. That’s the genre that I'm hoping to get to act for one day. And while I enjoy action thrillers and horror flicks, I don't necessarily go through the trouble to look for them. I just like mystery thrillers with twists. ‘Sixth Sense’ in particular is a memorable movie for me because I felt that it tells about something that could actually happen in real life."

Of course, “Sixth Sense” is the byword for movies with twists. But this is a movie through which you can fully enjoy the fun you get from thrillers, even if you know the secret regarding Dr. Crowe (Bruce Willis) Director M. Knight Shyamalan has done a brilliant job in making use of cliches from typical horror film to create his unique scenes. The white steam a child breathes out at the scene of the climax, alone is enough to make viewers freeze with shock. 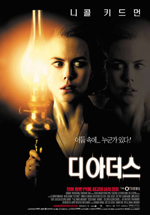 2. "The Others"
2001 | Alejandro Amenbar
“This is one of my three favorite movies. I cried a lot while watching it. I felt so sorry for main lead and her family. So sad and tragic. I just kept feeling sorry for them again and again. Isn't it something that could happen in real life as well? I believe I got more absorbed with this story because I’m an actor. Actors tend to get more carried away than average people. (laugh) In sad scene we tend to cry more and in a happy scene, laugh harder.”

Grace (Nicole Kidman) lost her husband due to war and is left alone to tend her children who suffer from a rare skin disease where they cannot be exposed to sunlight. However the servants who have been helping Grace -- who, herself is weak and delicate as her children -- suddenly disappears while strange things keep happening in her mansion. Grace struggles to protect her house and the children which then becomes an obsession that starts to eat her alive. Finally she and her children confront the real cause that has made them suffer and are faced with the reality never wanted to acknowledge.

3. "The Skeleton Key"
2005 | Iain Softley
“You’ll be surprised when you watch ‘The Skeleton Key.’ A certain young woman goes to a large mansion at an unfamiliar place to get to the bottom of a secret that surrounds the place. The film gets you doubting and guessing throughout, making you become suspicious of the house's owner, the butler and even think that the house itself may possibly be possessed, even the woman, whether she is a ghost or not. At the end it all comes down to a single death (laugh). It's an ending I couldn't never guessed."

“The Skeleton Key” is the newest champion among mystery thrillers with surprise endings. In Korea, when you type in the title of this film into a local search engine, the first connected keyword that pops up is “the conclusion” showing what a great job it has done with the ending, laying a perfect groundwork for it and taking time to create the last-minute surprise. The film employs all the traditional elements of a horror film including house horror and exorcism but its winning element is definitely its twist at the end. 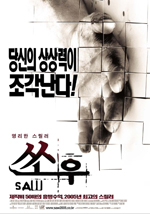 4. "Saw"
2004 | James Wan
“This movie was made into several series due to the success of its first movie but the best one continues to be ‘Saw 1.’ Whenever I watch movies with a great twist I taste catharsis and actually feel my stress level go down considerably. People usually try to guess what the ending will be but in my case, I just sit back and enjoy how everything unfolds. I was horrified by the last part in particular. I love that kind of idea. If I get to make a movie myself, I would like it to have it give off the same vibe and win over the audience with my ideas."

“Saw” is a movie that will shock you throughout and leave you feeling like you took a blow to the back of your head. Two men and a corpse locked inside a cell, accompanied by a dire situation in which you have to kill the other person or your family gets killed. The film was able to grow into a total of six series, attesting to the explosive power it claimed through a few definite concepts.

5. "Cinema Paradiso"
1988 | Giuseppe Tornatore
“Are you asking if there's a twist to ‘Cinema Paradiso’? Of course there is if you think about it hard. (laugh). I think that’s why I like it. Remember how Alfredo interfered with ToTo’s budding love for the sake of his future? ToTo realizes this only later on. Alfredo passes away leaving ToTo the film that carried all the kissing scenes and ToTo watches it, thinking of his childhood all over again… That’s what I call a beautiful twist (laugh).

The scene where ToTo and Alfredo roamed around the village on a bicycle or when movies adorned the empty night sky for those who weren’t able to go to the cinema, or when the village priest rang a bell with all his might whenever the film reached a cozy love scene and finally the scene of a middle-aged ToTo shedding a tear upon Alfredo’s final gift to him -- can be regarded as memorable classic scenes.