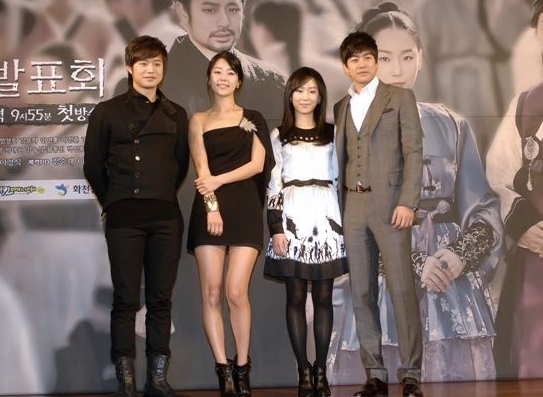 Around the time of late-Joseon Dynasty (1392-1910) when hierarchy between nobles and slaves started to fall apart and riots were common among peasants, two men were born on the same day and at the same time. Chun-dung (played by Chun Jung-myung) who grew up in a beggar’s quarters with no knowledge of his parents, dreams of “making this world a better place” by taking part in the peasants’ riot while rich, young noble Gwi-dong (Lee Sang-yun) who serves as a police official, fights against corruption within the government and speaks for the weak. Although both give their hearts to the same woman (Han Ji-hye) they become the greatest duo ever in order to reform the problematic world. The background of this drama is not set in a grand palace but an everyday market and talks not of the success of a great hero but the agony of common people. MBC’s “The Duo,” at a glance, is closer to previous KBS drama “The Slave Hunters” (2010) that portrayed the lives of those who made a living by capturing runaway slaves and in that sense, this upcoming drama is also a historical series about common people.

“The Prince and the Pauper” plus story of lowly lives of Joseon However, what sets this drama apart from “The Slave Hunters” is that first and foremost, while it added the new plot of the two men’s fate being switched, it took out the fancy action scenes. Joseon’s version of “The Prince and the Pauper” begins with beggar woman Mak-soon (Yoon Yoo-sun) who, for the sake of her son Gwi-dong’s future, switches the two babies. The plot is then combined with the depiction of various characters starting with Chun-dung himself, who pretends to be a merchant during the day but turns into a so-called 'righteous thief' who steals from the rich to give to the poor, all the way down to street beggars, gamblers and others living lowly lives during those times.

The responsibility of how well such pains of common people of those times are portrayed, falls squarely on the shoulders of scenarist Kim Woon-kyung who is famous for the past series “Moon of Seoul” (MBC, 1994) which has well-described the people living in the poor hillside area in the early 90s and “There Is A Blue Bird,” (KBS, 1997) that also gave vivid description of the sad lives in the corners of the city: namely nightclub showmen, nameless singers, swindlers and so forth. “Scenarist Kim Woon-kyung is particularly keen in writing about the inner pains of people rather than their bright side and did a great job in making the characters real according to the times they live,” said Director Im Tae-woo.

Of course, it is worrisome that aside from Han Ji-hye who appeared in film “Blades of Blood” (2010), none of the main characters -- even director himself -- have ever worked on historical drama before. However, director Im stressed with confidence, “The actors as well as I shall take on the task with a great bravado." The stiff language commonly used in historical dramas have been refined into more conversational Korean to help the first-time actors in such dramas to get used to their roles faster and Chun Jung-myung has been showing quite a passion in his new role, learning to do sword fights and horse-back riding from actor Jang Hyuk and seeking advice from actor Oh Ji-ho with the proper mindset for appearing in the historical drama about the country and its people -- both who were the main leads for “The Slave Hunters.” Above all, it should be noted that “The Duo” is a drama that focuses on the solid story itself rather than on fancy details. Thus the key point of the drama will lie in how well writer Kim Woon-kyung will be able to resolve the weak elements the drama holds through her storyline. Will “The Duo” succeed in becoming a drama that viewers can relate to for the first time in a while, like director Im said? Its first episode will be aired on February 7 at 9:55 p.m.