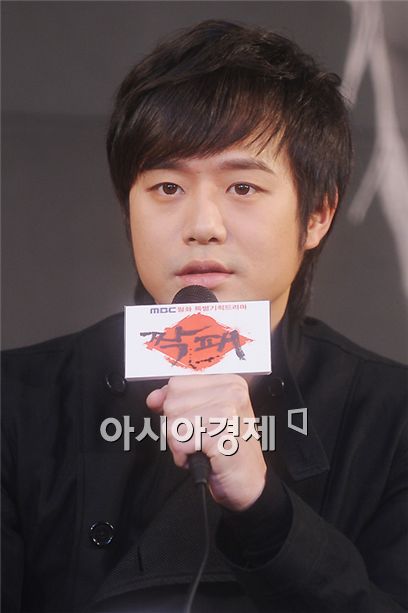 Korean actor Chun Jung-myung has said he was nervous and excited to take on a role in a historical drama for the first time.

Chun made the remark on Monday during a press conference for upcoming MBC TV series "The Duo" as he explained to reporters on how he felt about playing his first historical drama role during his 11-year acting career. "This was a whole different challenge for me. The show is currently focused on the early years of our characters with the child actors but it'll be hard to fill in their shoes because they are doing such a great job," Chun said.

He further added, "I went to an action school to practice the action sequences. We learned various things like kendo which will help with my acting. I also learned how to ride a horse which I think is a great sport."

"The Duo," written by scenarist Kim Woon-kyung and helmed by director Im Tae-woo, breaks away from other historical series that revolve around occurences in the palace and instead focuses on the everyday life of a slave, panhandler, shoemaker, butcher, thief and passerby who led an elite lifestyle in the past. The show, which also stars actress Han Ji-hye and Lee Sang-yoon, will air on the Monday and Tuesday primetime slot starting February 7 after current series "Queen of Reversals" ends its run.

Chun, 29, made his break into the entertainment industry with his role in KBS's drama "School 2" (1999). He has appeared in other small screen roles such as SBS' "Fashion 70s" and most recently in KBS' "Sister of Cinderella" with Korean actress Moon Geun-young.