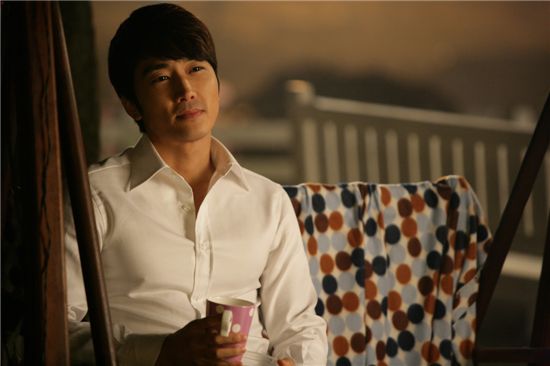 Song Seung-heon is perfect for the role of any melodrama -- but not just for his dreamy looks that seem like Prince Charming. What really helped him come this far or at the very least, allowed him to take a leap in his career, was ironically when he played the guy who will do everything for love and certainly not without flaws.

It was his TV debut role in MBC sitcom “Three Men, Three Women (1996),” that such imperfect and humane nature he revealed in the story with his dried-up sense of humor so unbecoming of his handsome features, what helped viewers to relax and warm up to him as a sweetheart on the screen.

In KBS smash hit series “Autumn Fairy Tale (2000)” that cemented his path to success, Song played a meek, teary guy who hesitated at every obstacle that stood between him and the girl he loves. In a way Song’s tendency to just be with the girl he loves and silently keeping an eye on her, came off as a lot more considerate, tender and warmer than the treatment one might get from a macho guy who would simply exercise his power to get a girl.

But Song’s filmography tells otherwise of what Song wanted himself to become. It was rather his long journey to erase whatever “weakling” image there exists of himself. Since “Autumn Fairy Tale,” some of the roles he took in films from “Once Run (2002)” “Geunomeun Meoshiteotda (2004)” “Fate (2008)” and "A Better Tomorrow (2010),” had him appear as either a delinquent, a bully or a gangster. Although it was his way of trying to re-invent himself as an actor amidst the world of men, this also left many of Song’s fans from his sentimental works only missing the softer side to him more. So if you are one of those fans who wish to see him in love, 10Asia recommends you to calm the fever with romantic films picked by Song himself. Below are the choice of films -- films that would have undoubtedly suited Song playing the main character -- handpicked by the man himself who said has "fallen in love at first sight before" and "boldly expressing feelings to the person I love.”

“The scene of two lovers’ interaction next to the spinning wheel was parodied numerous times in Korea (laugh). Quite a few messages contained in one movie from love to fantasy to value of good and evil. The idea of falling in love with a ghost was quite refreshing back then as well as the special effect that had Patrick Swayze slip through the walls of the subway train. I was especially impressed in the last part when Patrick’s friend who killed him in the first place got pulled away into darkness by some dark forms upon his death while Patrick went into the light.” “Ghost” presented Demi Moore and Patrick Swayze one of the most beautiful moments of their lives while winning Whoopi Goldberg an award for Best Supporting Actress. Love can surpass all obstacles, even death, and the film certainly did a great job of laying out that concept as romantically as possible. 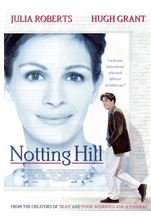 “This is something only possible in the movies and that's what made the story interesting. Seeing how Julia Roberts and Hugh Grant get their happy ending, I wondered, as an actor, if something like that could happen to me too. I liked the small, cosy bookstore that Hugh Grant ran and the climax of the film was when he boldly proposed to Julia Roberts. The acting of Hugh’s friends were also memorable. I could name this the pinnacle of romantic comedies.”

From the moments of the press conference to the dramatic proposal that leads up to the final happy ending, “Notting Hill” has everything needed for a romantic comedy. Its theme song “She” only leaves the film lingering in the viewer's mind for a longer time.

“The only thing I knew about this movie when I chose to see it was that it starred Brad Pitt, his first movie since his hit-film 'The Legend of the Fall (1998).' The female lead meets Brad Pitt at a coffee shop and two click instantly. But when Brad failed to ask the girl her number and two went separate ways, I was reminded of -- how should I put it? -- the heart-fluttering and frustrating moments of love. It really made sense in real life. I also found female lead (Claire Forlani)’s acting very charming.”

Brad Pitt, who dies in the story to become an angel of death, is actually closer to just a plain angel. Unlike the mature Brad we know these days, Brad Pitt in this movie is still filled with freshness that makes him perfect for the melodrama.

“Whenever I am reminded of this movie I can still picture Mandy Moore's youthful image and its soundtrack 'Only Hope.' With music that so well matches the beautiful images in the film, it's like watching one big music video. I was able to relate to the process of the plain Jamie (Mandy Moore) falling in love with the rebellious Landon (Shane West). I was even led to wonder if I could continue to love someone if I was in that situation. The love between two young people even as Jamie had to go, touched my heart.”

“Week to Remember” is a typical heart-stinging melodrama. Young lovers facing terminal illness may sound cliche but at the same time makes the story that much more sincere.

“What kind of love do you think Nicolas Cage and Elisabeth Shue would have shared during such desperate times? Unlike the films I've recommended so far that are about sentimental and beautiful love, this one is a bit more closer to reality and more painful. The highlight was when Nicolas Cage got all drunk at the swimming pool. The poster of the movie was so famous that I saw quite a few of them decorating the houses of my friends. The movie was also a perfect match with Sting’s music.”

We know where Las Vegas is on the map but the one depicted in the movie is filled with a surreal air. The location marks the beginning of love and death simultaneously, making the time-limited love between the two characters more painful and that much lasting in memory. Nicolas Cage was at the height of his acting career around this time, the role earning him the Academy Award for Best Actor at the 68th Academy Awards.