인쇄하기 스크랩 RSS
폰트축소 폰트확대
There are things that cannot be expressed through annual awards ceremonies. The big trophies are not enough to describe the gratitude we feel for the dramas that contributed to brightening our days during the past year. This is why 10Asia is presenting the “Thank You" list in which we selected 10 memorable dramas. This is a shout-out to all those dramas that at time melted our hearts with highly appealing looks, made our hands and feet cringe yet leave our eyes and mouths smiling with famous lines, delighted us at the mere sight of some characters and left the single viewers green with jealously with the romance scenes. Let us thank all these dramas that took our emotions on a most exciting roller coaster ride. So thank you! 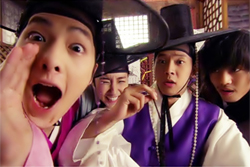 There is a fairy tale in Korea in which a filial daughter volunteers to sacrifice herself to a sea god in order to cure her father of his blindness. She requests 300 sacks of rice from the sea people which would be used as an offering to Buddha who was believed to be powerful enough to grant her wish. The viewers of KBS2 series “SungKyunKwan Scandal” are by all means, not blind, but had a similar eye-cleansing effect the blind father in the fairy tale must have felt, while laying their eyes on the four fresh youths attending the Royal Academy of SungKyunKwan dressed up in the noble's attire in 18th century Korea. The halo that practically beamed from behind their heads made the monthly TV license fee of 2,500 won absolutely worth it. First there was Gu Yong-ha (Song Joong-ki) the boy with a fair complexion and milky skin who hides his face behind the fan only to tease you with a wink and Moon Jae-shin (Yoo A-in) who knows how to leave young ladies lovesick with just his captivating eyes that showed through disheveled hair. And when Lee Sun-joon (Park Yu-chun), the perfect example of a young scholar with well-chiseled looks and graceful features, gazes down at Kim Yoon-hee (Park Min-young) beneath his long eyelashes to make playful gestures, Kim would respond to it with brilliant smile and reciprocate with “cute” acts. All that is enough to make one want to rush to the front gate of SungKyunKwan with 300 sacks of rice for that eye-cleansing effect once more. But do not take this the wrong way. It is just another way of saying how grateful we are, as viewers, to be able to live under the same sky as the adorable quartet.

Mirotic (/Magic Spell) of the Year

The beginning was ordinary. All Ki-hoon (Chun Jung-myung) did was call out “Eun-jo” but it somehow unlocked Eun-jo’s (Moon Geun-youn) tightly guarded heart and left her cooking for him and even taking off his socks for him when he falls asleep. Such scenes made young ladies fly to the mirror and whisper that same spell to themselves, even when they were not her. Some replaced it with their own names but of course, there would be no answer (duh). The beginning was sweet. When Mary (also played by Moon Geun-young) from KBS “Marry me, Mary” said “Darling” in a ringing tone as she ran, Moo-gyeol (Jang Keun-suk) responded “Oh Mary.” But there could be trouble if the magic words of love go beyond what viewers can handle. After all, how much could the poor “single” souls watching TV alone take?

Some-nam (Something About that Guy) of the Year 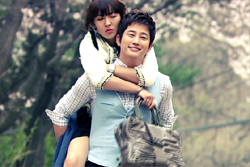 There is something about that guy that you cannot quite put your finger on -- hence drama watchers in Korea coined a term to refer to such characters: 'Some-Nam,' a combination of 'Something-about-him' and 'Nam' for guy ('nam-ja' in Korean). Going into more detail, Some-nam is a guy you are not in relationship with but you keep coming across through one weird situation or another. 'Some-nam' is a guy who appears like a knight in shining armor whenever you need help or are in danger but will shake it off as not a big deal after resolving the crisis. He moves somewhere between the lines of 'cool' and 'romantic,' leaving female viewers to swoon and that man is Park Si-hoo who in SBS drama “Princess Prosecutor” shows up as lawyer Seo otherwise referred to as “Seo-byun” for short, the one who skillfully melts the heart of female lead Ma Hye-ri (Kim So-hyun) through his gifts like an alarm clock in which his voice is recorded. He then concludes everything with a kiss. In MBC drama “Queen of Reversals,” his status was upgraded as chaebol Gu Yong-shik vied by young female employees but continues to be “Some-nam” for the female lead Hwang Tae-hee even though she is married. Of course, it was Im Ji-gyu his secretary, the “Some-Nam” of “Some-Nam” who changed the wheels of Hwang’s car. 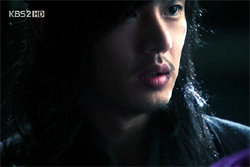 If according to Kim Joo-won (Hyun Bin) from SBS “Secret Garden,” love is a useless “hormonal disease,” the lovesickness felt toward drama characters can be described as a new influenza that leaves viewers overwhelmed to the extent of helplessness. Actually this may be the only disease that patients would rather dwell in rather than be cured of. “Seo-byeon flu,” “Tae-seop flu” and “Geol-oh flu” were the notable love flus of the year which proved to be far worse than the actual flu that went around. Their sources are Lawyer Seo In-woo (Park Si-hoo), the Korean version of a perfect man who, despite all the little pretenses and pranks, always takes good care of Ma Hye-ri, the female lead of the story; Tae-seop (Song Chang-eui), the pretty boy from SBS “Life is Beautiful” who seemed to be the very embodiment of innocence and frailty; and Geol-oh from KBS “Sungkyunkwan Scandal” who usually shies away from girls but always watches out for Yoon-hee (Park Min-young) from afar even if he cannot confess to her. Whoever you fall for among those three, that will be the day you will develop a chronic illness. There is no cure for it either.

Foxy Girl of the Year 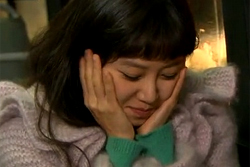 She pretended to not notice when chef Choi Hyun-wook (Lee Sun-kyun) openly flirted with her. But then she made physical contact with him by asking him to take out a key from her coat for her. She pretended she knows nothing about relationships. But it was she who surprise-kissed him in the elevator, not the other way around. She pretended she did not know anything about pushing buttons. But when Choi asked her to choose between him and her cooking career she replied with glee, “You of course, chef!” only to turn around later to speak up with confidence “I can see right through you and can tell how much you like me!” Yoo-kyung (Kong Hyo-jin) of MBC drama “Pasta (2010)” was the shrewdest fox in disguise. The skills of seduction displayed by female leads in the drama seem to improve every day. There should be some kind of lecture set up for this.

Rich Arrogant Guy of the Year 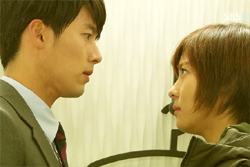 The rich guys in the drama always end up getting fixed in some kind of situation with the penniless girl. It seems that they cannot help falling for them instantaneously because having been pampered all their lives, they have never had a bucket of water dumped on their heads or received a nice, stinging slap on their faces. Joo-won (Hyun Bin) from “Secret Garden" is different in that sense, insisting that his love for the poor girl is just part of noblesse oblige. When La-im (Ha Ji-won) gets hurt he rushes her to a hospital because it is all because of his excellent upbringing that taught him well of the ethics of the upper class. But given how the ethics of upper class in society is established through a baseball bat there is much to doubt about his remarks. You sir, seem to take relationship ideologically!

Jewelry of the Year 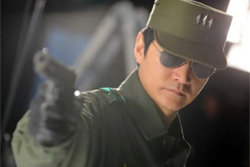 'Bo-suk' is a homophone to the word 'jewelry' in Korea. When actor Jung Bo-suk who played “Jewelry Jung,” a pitiful excuse of a man who desperately searched for someone who would listen to him and competed for a higher position in the house with his housekeeper Se-gyeong in the MBC sitcom “High Kick,” was set to play the role of the villainous Cho Pil-yeon in SBS epic drama “Giant” most people were doubtful. Their doubts proved to be false though as Jung successfully turned himself into “Pil-yeon the Reincarnate of Evil” who would easily see blood for those who defy him and was ready to do just about anything -- threatening or blackmailing -- to gain power. In the new MBC drama “Stormy Lovers” Jung will once again, appear as cold-blooded businessman Yoo Dae-gwon who will stir up the mood of the drama. Of all the shiny jewelries around the world, Jung was the shiniest of them this year.

Couple of the Year 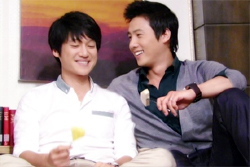 There are couples all over the place, inside and outside the drama. When Tae-seop (Song Chang-eui) asked, “Did I tell you how thankful I am?” Kyung-soo (Lee Sang-woo) replied, “Did I tell you that I love you?” The advertisement saying: “SBS should compensate if my son turns gay after watching the drama and dies of AIDS!” may actually be an expression of the jealousy felt toward this beautiful couple. Then there is the director Kwak Jeong-hwan and writer Cheon Seong-il duo who worked together for a whole year for two blockbuster KBS dramas “The Slave Hunters” and “Fugitive: Plan B.” But nothing can beat out director Shin Woo-chul and writer Kim Eun-sook who have worked on a total six projects starting with SBS drama “Lovers in Paris” in 2004 and now SBS series “Secret Garden.” Nonetheless, it cannot be denied that 2010 was a bountiful year thanks to these three couples.

Reincarnation of the Year 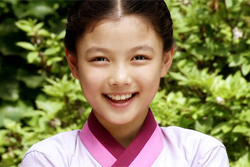 Kim You-jung was a sweet, obedient child named Yeon in a history drama “Grudge: Revolt of Gumiho." Then she died only to return as a restless soul that possessed Cho-ok's (Seo Shin-ae) body. In MBC drama “Flames of Desire” she appeared as the child version of Na-young (Shin Eun-kyoung) who showed unusual obsession for money. Then she appeared again as the child version of In-gi (Seo Woo), the daughter of Na-young who happens to look exactly like her mother when she was young. She left her hometown lashing out, “In my next life I’ll be born into a family with respectable father, not the murderer I live with right now!” She was then reincarnated as the child version of Soon-jung in another drama SBS series “Happy Maker Soon-jung.” To top it off, her father (Jang Hyun-sung) also happened to be the same guy who played Lord Yoon Doo-soo who killed her in “Gumiho.” Death becomes her, literally.

Safety Net of the Year

Anyone can be in a relationship. But how could 'she' of all the people do this to us? Young-ae (Kim Hyun-sook) from tvN’s “Rude Miss Young-ae” was the hope and other ego of all ordinary, single women in Korea who could easily chew on pork hocks, beat up a street pervert, mutter about bad luck for continuously meeting Mr. Wrong but never letting that put her down no matter how much the world she lived in sucked -- up till season 6. The show, in its 7th season had Young-ae finally begin her relationship with chief Jang Dong-gun (Lee Hae-young) which we “try” to understand because she might deserve that after going through so much hardship and heartbreaks in the past series. But Young-ae holding Jang’s hand while listening to her handsome colleague San-ho's (Kim San-ho) confession?! Seriously people! Stop reaching out for back-up plans when it comes to romance! How will you convince us now that you have ended the day with a beer and nighttime duty after this! This is traitorous! There are people who spend night after night writing deadlines and we are certainly not waiting for season 8 to see something like we saw on season 7!