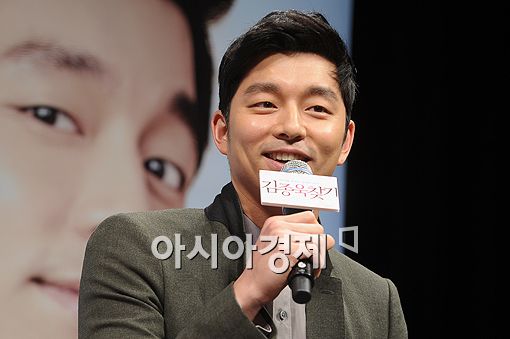 At a press conference held Thursday at a CGV movie theater in Apgujeong, Jang made the remark while explaining why she chose to cast Gong Yoo for the role of Han Ki-jun, a timid and clean-cut guy who after getting fired from his job as a travel agent, sets up an office that helps people find their first love. "Gong Yoo is the kind of actor that is a good person and professional while playful at the same time. So I thought he would be able to take on the role that is both serious and comical which most actors aren't able to do, sort of like the image of Hugh Grant, a romantic guy who can touch people's hearts while not taking things so far that he will ruin his image."

In the movie, Han Ki-jun first meets Seo Ji-woo, played by Lim Soo-jung, a musical director in her early thirties with an aggressive and boyish personality, when she comes to his office in search of her first love named Kim Jong-wook, whom she met during a previous trip to India.

While on a search for Kim, Han and Seo slowly develop emotions for each other and eventually fall in love. In regards to working opposite Lim, also a close friend, Gong Yoo said he enjoyed the experience but felt uncomfortable when it came to shooting kissing scenes with her.

Director Jang chided in, explaining that both were professional actors and would usually shoot all their scenes in two takes except for the romantic ones. "There were many bloopers when it came to those scenes since there was no romantic feeling between the two."

Originally based on a musical written and produced by Jang, "Finding Mr. Destiny" has been a big hit in Korea since raising its curtains in the country in 2006, showing over a total 1,200 times.

While the movie adaptation is set to open in theaters on December 9, Gong Yoo, Lim and Jang will attend a showcase for the film tonight.