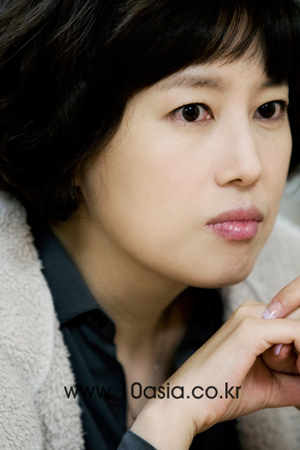 10: After episode 15, it seemed that you were trying to insert more stories into the drama and that caused some trouble to the flow. What do you regret the most?
Kim Tae-hee: I still don't know whether it was because I added “Geumdeungjisa” then rushed in having to wrap up the latter half of the story, or whether I should have just dealt with it probably and made the story longer. But I was worried that may lower the ratings for the show. (laugh). I tend to make my scripts long so most of the portions edited beforehand in the script was usually about Geumdeungjisa. It’s something I'll reflect upon now and in the future when I do the next project.

10: But on the other hand, I believe there was a reason you included Geumdeungjisa episode in the drama, as a writer.
Kim Tae-hee: A girl in disguise as a boy didn’t seem strong enough of an impact for the story. I was also worried with what else I should keep up the tension of the story after Yoo-hee's gender is revealed. And Geumdeungjisa was necessary in turning the original story into a drama. For example Hongbyeokseo (the red messenger) in the book tells a lot about problems in society but in doing the same thing in drama, it could be easily forgotten so I needed something to bring all the main characters together. Also, by linking it with King Jeongjo’s reform plan I thought I could make the story much richer.

10: You made quite an impression with the dialogue that seem to exude class and dignity as well as the philosophy of those times. I think you can credit that to your past experience on working on long history dramas.
Kim Tae-hee: I think the only reason I was selected as a script writer for SungKyunKwan Scandal is because I had my nose stuck in history dramas for too long (laugh). I thought I’d never make it when I first took part in KBS drama “The Immortal Yi Sun-shin” as a supporting writer. But I think I got used to it after following the style of writer Yoon Sun-joo. Back then, I used to think that writing a history drama is like running with a sandbag tied to my ankles. But those times have helped me a lot. I’m finally understanding how the heavy burden can turn into a pair of wings to help me fly.

10: Not just the main characters but all the characters that appeared in SungKyunKwan, from the Parliament Minister Lee (Kim Gab-soo) to fellow student Kim Woo-tak (Jang Se-hyeon), had a logic of their own, making them more convincing. How do you create your characters?
Kim Tae-hee: I try to see what motivates the person and what comes to me naturally is their lines. In my synopsis, there was always a line added to each character. In episode 15, Sun-joon confesses to Yoon-hee “You’re a boy yet I’m in love with you.” I put it that way because I felt that’s how Sun-joon would have said.

10: Throughout the drama Lee Sun-joon changed the most, as if he was being given life lesson. What is it that you wanted to show through Lee’s trials?
Kim Tae-hee: Just like Yong-ha’s advice to Booyeongha (Seo Hyo-rim) to accept that the world doesn’t always revolve around you, it is important for a person to accept things as it is regardless of the circumstances. I think that’s one of the hard lessons of life for young people. Maturity is a process of learning and accepting that fact and this applies to all four main characters. But how Sun-joon changes probably stood out more because he had been so sure of his view of the world he built for himself.

10: The key point to a girl-in-disguise-of-boy story is how convincingly you portray the process of two people who first meet as two guys fall in love with each other. In the drama, Sun-joon and Yoon-hee only had each other when they enter the royal academy together. For them, friendship came before love which seems closer in plotline to film "Brokeback Mountain (2005)" rather than other Korean drama of girl-in-disguise MBC's “The 1st Shop of Coffee Prince.”
Kim Tae-hee: One of my friends asked if I view all romantic relations as based on comradeship just because I once took part in a student demonstration and throwed rocks. (laugh) I didn’t do it on purpose but in Yoon-hee and Sun-joon’s case it couldn’t be helped. Someone told me melodrama is about showing the process of people opening hearts. I like the saying and this is exactly what I want to do in my next project. 10: The task of studying all the historical references alone seems like a daunting task. I’m sure you have built up know-how to build up the knowledge through your past projects.
Kim Tae-hee: I was only helping out scriptwriter Yoon in both big dramas “The Immortal Yi Sun-shin” and “King Sejong.” This is my first time doing things all on my own and I felt a world of difference (laugh). But if you want some pointers for studying history I recommend Park Si-baek’s the Annals of the Joseon Dynasty drawn out in comic book style. It is organized in simple, easy words and can help you grasp things fast. Reference book for high school history text and introductory book on Korean history written for middle and high school students will also help a lot. I went through many books on King Jeongjo and also read theses related to SungKyungKwan and yet I would still come across missing links, the kind I couldn't do much about and just let them pass. The important thing is to find certain point in history that is common with the present. Just like Cheon Seong-il the writer of the KBS drama “The Slave Hunters (2010)” said “the important thing in writing a history drama is not writing about certain period in history but in what period you choose to write a certain history.” I was so impressed with his words that I drew a line underneath (smile).

10: Then what do you think SungKyunKwan Scandal has in common with the present times?
Kim Tae-hee: It may sound irresponsible to tell people devoid of hope to have hope. But if there's a society you hope for, then you should start by having hope first. So when I came up with Yoon-hee's character I first wondered how she was able to equip herself with so much knowledge. I presumed it was because her father secretly taught her as she stood outside the door. What if Yoon-hee thought her hands were freezing and just gave up listening? That’s the message I wanted to get across.

10: But you could say Joseon went downhill after King Jeongjo. Do you believe that history progresses?
Kim Tae-hee: That’s not an easy question to answer (smile). Well, back in college when I was studying social science I was adamantly against my seniors who supported the idea that history moves forward. In my eyes, a salary man was no better than a serf in the Middle Age of the past and I was participating in their gathering simply because the reality I lived in sucked. But then last year I read a book called “Kinoshita Shojo throws Bomb at Japanese Emperor.” Kinoshita Shojo was the Japanese name of Lee Bong-chang (1900-1932) whom Koreans now awknowledge as a patriot during the Japanese colonial era (1910-1945). When Lee was young he changed his name into Japanese and went to Japan to make a living. However when his true identity was exposed he was so abused by the Japanese that he went to Kim Gu the president of the provisional government in Korea based in Manchuria and revealed his intention to bomb the Japanese emperor. Despite much doubts and opposition from his aides, Kim decided to place his faith on Lee and gave Lee three bombs. Kim didn’t allow Lee to test the bomb however which was an unfortunate decision because the bomb didn't work. Instead Lee got executed trying. But few months later, another young man named Yoon Bong-gil (1908-1932) who was deeply moved by Lee came to Kim to volunteer for a similar task. This time he succeeds, killing many Japanese leaders in Shanghai. The story made me think about what Lee has left. Could we truly call him a failure? And for the first time I wondered if history is something that moves forward through many failures.

10: What era would you like to work on for your next project?
Kim Tae-hee: For now, I prefer the present (laugh). But someday I would like to write about the times of Japanese colonial era, about the people who didn’t lose hope and laughter despite the trying times.