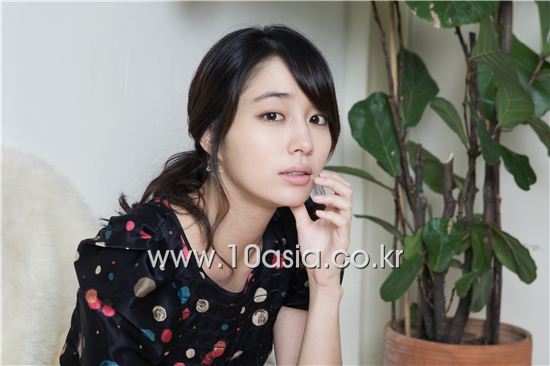 10: "Cyrano Agency" is a movie which contains elements of humor throughout. You seem to have said many times that you had fun reading the script so where was it that you broke out into laughter?
Lee Min-jung: The scene where Sang-yong (played by Choi Daniel) objects to the pastor's sermon? I thought it was really funny while reading the script when he asked for a deal, demanding the pastor end his sermon in an hour "Including the sermon, singing hymns and the words of guidance!" and the pastor responds "You win."

10: But I think the script must've been different from the completed movie.
Lee: Because there are parts of the script which have been expressed down to every detail while some things did not manage to make it into the movie. And there are parts which were changed on set as well.

10: In that sense, I think you may think that the scenes you like from the script and scenes you like from the movie must be different.
Lee: Well since it's our movie, I have an affinity for it and I think it's fun but I think the parts I'm not in are more interesting because I can look at them from a more objective stance. For example, I wasn't able to watch the incident which occurs in the beginning of the film being shot so it was better getting to see it in the movie. I think the beginning of the movie was done well. The incident opened up the element of humor. I think going into a movie knowing there are elements of humor in it is different from finding out in the middle that it is funny in parts. For example, I laughed out loud in the theater while watching director Park Chan-wook's "Thirst" but I think others didn't laugh because they didn't know it was black comedy. I think our movie does well in the beginning to show that as well.

10: Did you choke up as well?
Lee: In the part I just mentioned. It felt like Hee-joong is being cured. And I liked the fact he would start new love after being cured. I think there's a good mix of romance and comedy in our film. It's not a romantic comedy where there is more comedy.

10: Like so, it seems that the movie touches on universal emotions and the elements of humor and progress of plot are portrayed in a clean-cut manner. But on the other hand, like you mentioned just now, there are slightly maniac works like "Thirst." Which do you enjoy more?
Lee: I actually think that movies need to be fun. I won't blame someone who wants to make a minor picture which does not care about how commercial it is but instead focuses on it having a clear characteristics and fun, but I think it would be best if it's both commercial and fun. I like movies which are fun in general but I also like films which have been shown only in a few theaters such as "500 Days of Summer" and "Eternal Sunshine." It's not as if "Eternal Sunshine" is considered to have less cinematic quality because it doesn't run in theaters for a long time. It's important that it's gripping even if it may be a slightly minor movie. But movies are the result of commercialism as well as being an artwork. So I think it's best if it can satisfy both sides rather than lean to one side. 10: It's rare that happens so on.
Lee: That's right. That's what we call a masterpiece.

10: But like you say, as rare it is for a masterpiece to be created, shouldn't you have to xxx a various range of films to broaden your perspective on those two aspects?
Lee: I used to read a lot of books and watch a lot of movies in the past but I'm so busy that I haven't been able to any of that recently. I've been drained in terms of cultural sentiment. I think I'll have to run away somewhere with a few books and my iPod once I'm done promoting "Cyrano." I've been pouring out so much that I need time to recharge. Watching films is as important as shooting them but I was so tired that when I recently went to watch "Inception," I fell asleep. And I had really wanted to watch it because everybody was praising it. I saw how the main characters dream but I didn't know whether they were dreaming or if I was dreaming about "Inception." (laugh) And then I woke up right when the main character spins his top at the end. I was able to presume roughly from that ending what the conclusion was about.

10: But everyone would let out an 'oh' for that scene.
Lee: Everyone really did. (laugh) And that's why I thought, ah, it's a well-made movie. I should watch it when I'm not tired.

10: What style of books do you like?
Lee: I like Alain de Botton, and I've purchased Haruki Murakami's "1Q84" but haven't been able to read it. Of Korean writers, I like Kim Young-ha and works like "Salivate" by Kim Ae-ran. And it's a bit obvious but I also like Guillaume Musso who writes captivatingly. Now that I think about it, I really haven't been able to read at all the past year. I'm going to run away after promoting our movie. I'm going to break my mobile phone. (laugh)