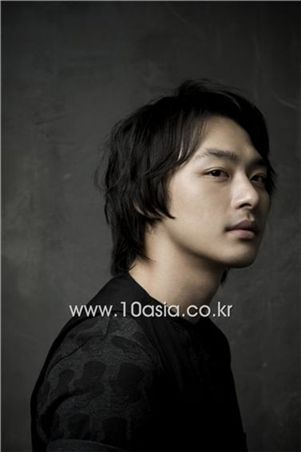 썝蹂몃낫湲 븘씠肄
My name is Jun Tae-su. I had thoughts of using a stage name like my sister but I decided to use my real name because people say Jun Tae-su has a good vibe to it.
I was born on March 2, 1984.
I have three older sisters. My second oldest sister is Korean actress Ha Ji-won and my other two sisters are both married. My oldest sister's son is in second grade and is quite fond of me. I think it's because I have a lot of video and computer games in my room.
I used to play soccer on the Suwon Samsung Youth team. I was right wing and I sometimes moved to the top. I was the kind of player that would dribble the ball and score a goal rather than being a striker. And then I had to quit when I was a freshmen in high school because my father was strongly against it. I think it also had to do with my uncles that were injured while playing a sport. I still continue to cheer on the Suwon Samsung soccer team. The international team that I root for is of course Manchester United because of player Park Ji-sung.
My all-time favorite soccer player is Ko Jong-su. He is particularly memorable because I decided to play soccer after watching his skills during his glory days on the Suwon Samsung team. It was quite sad seeing him retire after going through many ups and downs.
I starred in the movie "The Madonna" without auditioning for it because actress Ku Hye-sun asked me if I would. I agreed to do the movie without reading the script but later when I saw the movie the visuals turned out extremely beautifully. If terms of content, the film could be said to be a bit ambiguous and serious.
As a director, Ku Hye-sun is the type who leaves everything entirely up to the actor. She believes that actors know their characters well and can do a good job of bringing them to life.
We shot 80 scenes per day during the two days and three nights I shot the movie "K&J Fate." It was an unbelievable amount but it was possible because they have already decided on the continuity and the angles of the movie. I really spent all my time filming the movie outside the time I spent eating. The movie was filmed in the Jeongseon County [located in the Eastern part of Korea] in November and my character K didn't wear a shirt. It was really cold and my body was shaking but I endured it because K was a rather strong and noir-type character.
Ha Ji-won as an older sister is definitely just an older sister. (laugh) But our daily conversations revolve around our work after I started working. She monitors what I do and gives me advice on what to do and what not to do.
It takes a great amount of effort to shoot each scene for KBS' "SungKyunKwan Scandal." The director is quite the greedy type. He shoots scenes at various angles. We still have quite an amount of time left but I feel we might start shooting up till right before the show goes on air. (laugh)
I am currently a student in the school of plastic arts at Seowon University. I haven't been able to go to school because I've been busy with the drama. However, I want to graduate and learn more about my major. I would like to create plastic art works that will express my experiences when I am in my mid-thirties and then open up a gallery to display my work.
What I really want to learn right now is scuba diving. My sister (Ha Ji-won) learned it for a movie and I wanted to learn with her but I was set to appear in a drama. If I'm going to learn I want to learn the proper way to scuba dive and get my license as well. I'm learning how to shoot an arrow through "SungKyunKwan Scandal" but I don't think I will be able to do it properly since I learned it over such a short time period.
I'm living on my own right now because of my busy schedule. My manager is my roommate and as a roommate...(looks over at his manager) I have no comment. (laugh)