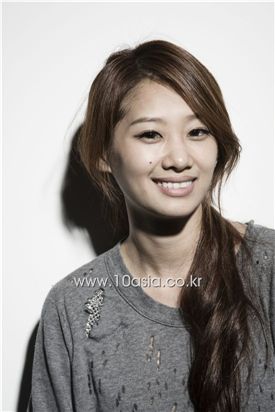 My name is Hyun Juni. It’s my actual name and not a stage name. My grandfather went to the naming center to come up with the name. What does it mean? I don't think it has any special meaning. (laugh) Every time I started a new school year, my homeroom teacher would ask, "Who's Hyun Juni? Are both your parents foreigners?"
I was born on August 1, 1985. My family is composed of my parents and my sister who is eight years younger than me.
I began to play the flute when I was in the first grade. I played for about ten years before I decided to join my high school band. My parents reaction was that they wanted me to reconsider and that if I was going to regret my decision then I shouldn't start it at all but if I wasn't going to regret then I should do it until I am the best.
I can't put down the guitar because I play a highly gifted guitarist in SBS' TV series "I Am Legend." I used to have lessons for about four to five hours straight before going in for filming. I prepare fancy notes and show off in front of everyone on set so that they can see that I have been practicing. The audience on set respond positively to the song "Love, love, love" and I get explosive responses because I use my fingers instead of the fingering technique or a pick. (laugh)
Lee Byung-hyun, the C.E.O of the agency, bought me a guitar saying "Make sure to play hard and send a photograph proving you are." I haven't sent him a picture yet but hopefully he saw it on television. (laugh) I went around bragging my guitar saying, "The C.E.O of the company bought this for me. It's really expensive!" and just like its hefty price it is really heavy! I thought that my collarbone would fall out if I kept carrying the guitar around so I shift it around while holding back my tears.
My face is on the dark side so the lighting director tells me, "Oh, there's no use even though we turn the lights on you." I cover half of the lighting when I'm standing next to the other actresses and actor Lee Jun-hyuk because you can see the difference in complexion because they are so white. That is why I act coquettishly in front of the lighting director to look lighter. (laugh)
I check the viewers' message board whenever I get the chance to. I look at each and every comment. I don't get hurt from the malicious comments because I have been prepared ever since the beginning of MBC's drama "Beethoven Virus." I refer to their suggestions about acting and clothing. I don't plan on changing the way I look so people will just have to get used to it. (laugh)
I played the role of Wang Soon-deok, a young girl from Yanbian, in the movie "Take Off" and not even my closest friends recognized me. They said "That was you? I saw the movie and I don't think you were in it" and I comforted myself saying that it was because I did such a great job with my role. (laugh)
Many people ask me what the best method is to learn how to play the guitar. It may seem hard at first but a person's skills and interest will improve drastically if they learn how to play their favorite song. My favorite song is Damien Rice's "The Blower's Daughter" and even though it's a hard song, I found an arrangement which was easy and practiced it. And learning how to play the guitar at an academy is a waste of your money because no matter what, you start off by playing "Romance." (laugh)
I may not look like it but I'm quite a neat freak. (laugh) I cleaned my house for 24 hours when I first moved out on my own. I stopped cleaning because I became very tired from a busy schedule but I'm usually the type who can't stand to see a pile of unwashed dishes or hairs lying around in the bathroom.
I have a lot of favorite bands but of course no one compares to The Beatles. I also like the band Chicago. They are classics.
If I were to make a movie about a band it would be fun to show the story of FT Island or CNBLUE. I feel a new storyline will come out unlike the usual band story or an underdog’s success story. But of course, the main message that I want to focus on is moving the audience's hearts with the music.
Since I was twenty I have dreamed of performing on "Yoon Do-hyun's Love Letter" or a similar music program with a group of people with the same interest at an old age. I want to appear on the show with my white hair, wrinkles and with pretty makeup on. That is something you can't do without makeup. (laugh)