Traces of Lee Jun-ik's work in "Blades of Blood" They have all dreamt about the moon that escaped from the clouds. Lee Mong-hak (played by Cha Seung-won) wants to shine as the king who renews the rotten Chosun period and Hwang Jeong-hak (played by Hwang Jung-min) hopes he can clear away clouds by blocking Lee Mong-hak who took away his conviction and the life of his friend. Kyeon-ja (played by Baek Sung-hyun) wants to overcome the pent-up anger he feels towards Lee Mong-hak who killed his father. And Baek Ji (played by Han Ji-hye) simply wants to walk under the moonlight with the person she loves. However, Kyeon-ja screams "Have you once in your life ever lived in a world like that" and fail to step under the moon's brilliant light.

Traces of the war and laughter from "Hwang San Bul" and love and tragedy from the "King and the Clown," both productions by Lee Jun-ik, can easily be found in his new pic "Blades of Blood." The film resembles “Hwang San Bul” in how the most serious situation and tragedy is melted away by humor and "King and the Clown" when Kyeon-ja cries in a thunderous voice towards the craziness occuring in the palace. However, it is difficult to declare that "Blades of Blood" is director Lee's final masterpiece, just like the saying that it is hard to create a beautiful face with the perfect features. The conflicts amongst the characters are dull enough to seem trite and it cannot be concealed by the beautiful scenery or lyrical music. Will "Blades of Blood" be able to become a different moon for the audience who has already experienced and found joy from the prominent historical drama like "Slave Hunters?" The movie opens in local theaters on April 29. 10: Hwang Jung-min, you did an excellent job portraying the role of blind swordsman Hwang Jeong-hak, making it seem like you were actually him instead of someone just imitating the role.
Hwang Jung-min (Hwang): I prepared really hard for this role in my own way. I attended classes at a school for the blind and with their permission, recorded their actions and their eyes with a camcorder. But I'm still just imitating. I think I got lucky in making my acting more refined though by talking with the other actors and the director. 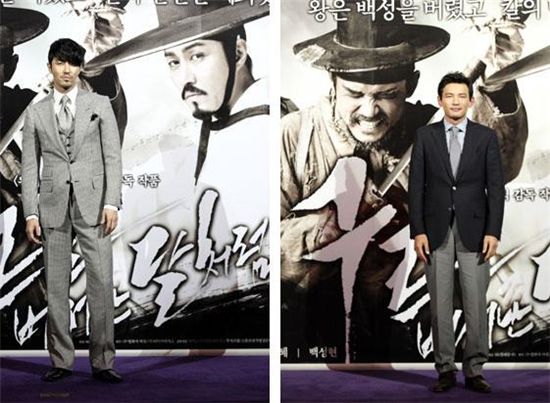 10: Baek Sung-hyun, are you okay even after getting hit in the head a lot by Hwang during filming?
Hwang: The sound effects for when I hit Baek in the head were excellent so that's why they seem more authentic.(laugh)
Baek Sung-hyun (Baek): I was immersed with my role so instead of it being painful it felt refreshing. And for the scenes where I get hit, we wouldn't plan ahead of time on how we would shoot it but Hwang would hit me in different areas depending on how he feels that day. (laugh)
Hwang: So are you saying it hurt or not? (Laugh)
Baek: It hurt a bit. (laugh)

10: Han Ji-hye, compared to your previous roles, I think you would have had a lot to show through your role as Baek Ji. She is is a tough Korean geisha who at the same time is very noble and pure. On top of that you even sang the "Sa Rang Ga," one of the soundtracks to the movie.
Han Ji-hye (Han): All of my scenes that had been shot in the beginning got cut because I didn't act well. But I learned a lot from director Lee by talking to him during the filming. Later on, even he said that it was as if I had really become like Baek Ji and I too enjoyed the process of becoming her. I like it even more now after watching the film. (laugh) For the song, I practiced a lot with music director Kim Soo-chul and we ended up finishing the recording faster than I thought because he said he like the first recording that we did. 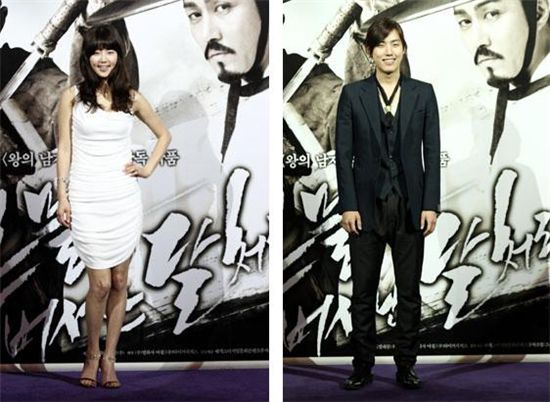 10: Your character Lee Mong-hak isn't that important relatively in the homonymous original comic. How did you interpret your character for the movie?
Cha Seung-won (Cha): Lee Mong-hak is a very abstract character in the original work. I talked a lot with the director after receiving the scenario for the film -- from light topics to Lee Mong-hak's birth. But honestly, if I said ten things about my character to the director, I think two was about the character and the rest of it about life. (laugh) So we created his character naturally while talking about life. I think the only effort that I put in was keeping in touch with and talking to the director often. (laugh)

10: The cold-hearted Lee Mong-hak, who had left his love and friends to fulfill his dream, tears in the ending scene. It made the ending to the movie even more memorable.
Cha: The director explained how he wanted to show passion from the beginning and more passion towards the end. It was even more so with that scene because it was the last scene we shot. We didn't really talk much about that scene but I think having talked with him about many things helped a lot.

Q: Is there anything you paid attention to in particular to play the role of Lee Mong-hak? Your pointy teeth stand out.
Cha: When I saw the original comic book, I interpreted Lee Mong-hak as a character who has a sense of brutality and savagery within him. Of course, in the film he does show a sensitive side to him, as the romantic who has no choice but to leave the woman he loves, but he also gave off the vibe of a beast so I used a prop for my teeth. I purposely showed the teeth when using the sword so that that aspect of his personality stands out. 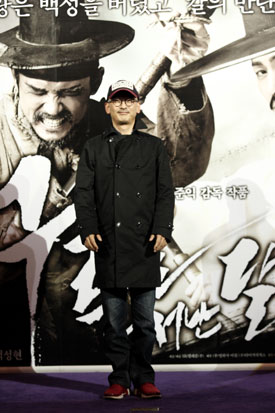 썝蹂몃낫湲 븘씠肄
Q: Like in your previous films "King and the Clown" and "Hwang San Bul," the king again is showed as weak and far from your ideal ruler in "Blades of Blood."
Lee: A king is sort of a symbol. But he too is just a weak being, ahead of being a king. And when I try to express who the king is, I try to show it by how he reacts to what situation each character is in, so that's why I end up drawing him as a weak and soft person or in a form which deviates from how they are typically shown in cinema.

Q: The original comic focused on the stories surrounding Kyeon-ja but the film adaptation focuses on all four characters.
Lee: The original story was told from the first person's point of view but it was impossible not to give the other characters more weight in the film version if I wanted to talk about that era and the relationships in two hours. Plus it's a film which cost several billions of won to make so I wanted to do more than just tell the story of how a single teenager grows up. At the same time, I also wanted to instill a sense of how much growing pains Kyeon-ja suffered during the ugly times he was living in so I tried to show this by drawing on how much the other characters contributed to Kyeon-ja maturing. 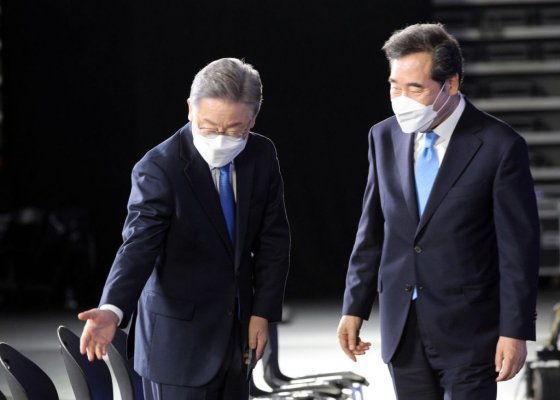 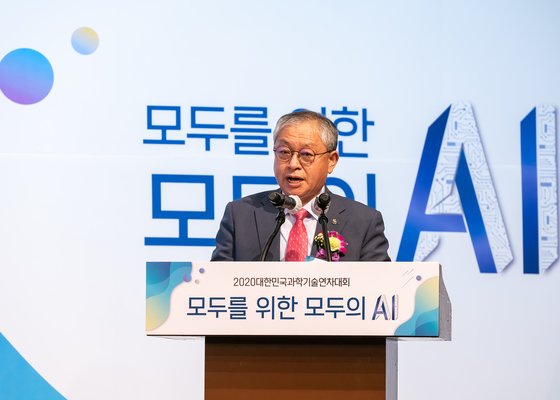 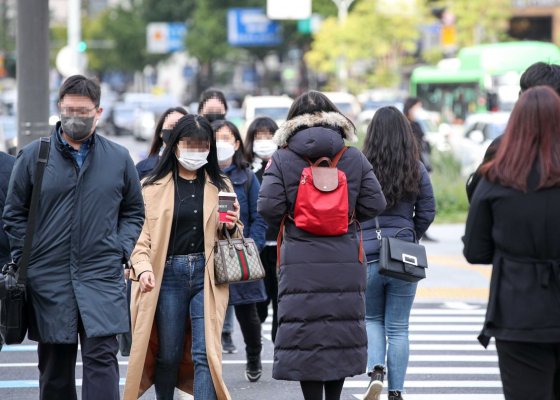