The time has come finally to bid farewell to KBS TV series "The Slave Hunters". What kind of ending will come for this extraordinary drama -- which showed off fantastic imagery from the start, breaking records in viewership rating with terrifying speed and at the same time carried a fairly weighty political discussion? One does not know but one thing is for sure; that the key belongs to character Song Tae-ha (played by Oh Ji-ho), who had lived his life being loyal to his master but now dreams of making a better world. Now that even one of his enemies Dae-gil (played by Jang Hyuk) has decided to help him, what kind of dream does he have and how will he achieve them? And what has Oh Ji-do dreamed and achieved during the eight months that he spent portraying Song Tae-ha and unveiled his new possibilities? In a joint press interview held on March 24 -- the day before the final episode of "The Slave Hunters" --- the actor talked about the past eight months he spent working on the show. Q: The show will be ending at last. How do you feel?
Oh Ji-ho (Oh): I shot my last scene yesterday and it was the scene where Tae-ha and Hye-won (played by Lee Da-hae) are leaving and asking Dae-gil (played by Jang Hyuk) to come with them. Dae-gil and my character raised their hands up in the air and hugged each other, and I was moved when we filmed that scene. A couple of staff members even cried because it was the end, even though it felt like there would be more. I feel relieved now, not like how I felt when I finished other dramas. I am relieved because the show did much better than I expected and I did what I wanted to do, like playing a character I wanted to play.

Q: How do you feel now about your choice?
Oh: I have discovered the joy of shooting a historical drama. When you shoot a drama in new surroundings, go to many places with beautiful scenery, you start to feel new about yourself too. And I think growing a beard for my character in a historical drama helped my acting transformation. I have shaved off the beard now and feel a bit embarrassed, as if I have taken my clothes off. Like how an introverted person can start to talk when he puts on a mask to do a mask dance, I think I too was able to change my character by growing a beard. Q: Speaking of characters, you played comical characters in your previous dramas -- MBC's "Couple or Trouble" and MBC's "Queen of Housewives". Why did you decide to play a different kind of character this time?
Oh: When I was doing romantic comedies, I played a man whom women would find adorable and would want to take care of. But just once I wanted to play a character that men would find truly loyal and cool and that is why I decided to play Song Tae-ha. Looking cool like [Korean actor] Choi Min-soo, who we admired when we were young.

Q: Then was there anything hard about acting the part?
Oh: I didn't worry about the action scenes or visual stuff because that is something the director would take care of. What was hard was that I myself found Song Tae-ha very stifling. I felt like Tae-ha should do something at certain points but he didn't. He was a character who lived with a certain cause but he didn't do anything and there was no space for movement. The articles about me speaking my lines as if I was reading a textbook may have come from such stuffy character of Tae-ha.

Q: Tae-ha is someone who created the specifications of a hero, but it must have been all the more stifling for you to play him because he didn't vent that out openly.
Oh: In the beginning, I played Tae-ha thinking that he was literally a hero who would make a revolution but it turned out that he wasn't. So then I reached the conclusion that he was just a military officer who just carries out orders. He had the strength to rescue the young royal king (played by Kim Jin-woo) to carry out the order of Prince So-hyun, whom he used to serve, but that was it for him. So whatever he tried to do more, it wouldn't work out. He visits Lord Bong-lim (played by Lee Joon) and asks him to spare the life of the young royal, which doesn't work out. He is close to a Chinese general (played by Yoon Dong-hwan) so he tries to entrust himself over to the Qing Dynasty, but still he wouldn't go to Qing. When the loyal solider meets Hye-won, he changes a bit. He starts small by protecting the woman close to him, then eventually dreams of making a better world which doesn't have boundaries of the nobles and commoners. I think that is why he began to feel that he wants to stay in the countries somehow and change the world little by little. 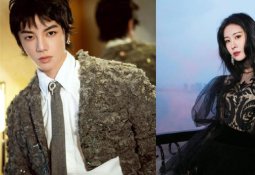