"I would have something to say if it was about martial arts..." said Jang Hyuk before the interview, as if he were an action star who was in love with martial arts. But by the time the interview ended, I found out that to Jang Hyuk, talking about martial arts meant that he would talk about everything -- his acting and his life. Like a martial arts master finds enlightenment through martial arts, Jang Hyuk was devoting himself to his life through acting. He understands his character by melting martial arts into the acting, and reflects upon his life by analyzing the character. For Jang Hyuk to play Dae-gil in the KBS TV series "The Slave Hunters", it means the same as that he will pour out all of his life. See what and how much enlightenment he has gained from portraying Dae-gil. 10: How did you feel when you first got the script for "The Slave Hunters"?
Jang Hyuk (Jang): I think the boundary between genres is becoming more vague. If you look at a film like "District 9", there are elements of science fiction, action, melodrama and political satire in a single movie. I think that visuals, structure and perspective are more important than genre nowadays. And I thought the same with "Hunters." In typical television dramas, the main characters lead the show while the supporting actors are in the background. But in "Hunters", it seemed that each character had a story of his own, like in the [U.S. TV series] "Band of Brothers". And the show would be telling Dae-gil's story in one setting but another story would be developing in another setting with the perspective on it changing depending on the character who was telling it. The plot develops on similar stories, just from different perspectives, so I thought it was a drama where everyone is a main character as well as a supporting character.

10: That's why it seems "Hunters" is about what goes on in their world, rather than telling a story about a single character.
Jang: That's why I personally hope there will be a documentary-style show attached to the end of "Hunters" to objectify that world. The show started off subjectively by telling the story from a certain character's perspective but it would end objectively by showing the world as it really is. I personally like the film "Hwang San Bul" where the merchants and kings spoke different dialects depending on where they lived. The film showed something that existing traditional stories hadn't shown before by simply changing the perspectives. I think "Hunters" is like that too.

10: Then what kind of a world do you think "Hunters" is depicting?
Jang: The most important element is the people. I think "Hunters" begins its story by telling how people became influenced by their history and how that history has continued on into the present. In the case of Dae-gil, he could not marry the woman he loved because of the status system, which is also what ruined his family. So after he becomes a slave hunter, he hangs around with the commoners and lowly people like Choi Jang-goon and Wang-son although he was born an aristocrat. So there is no such thing as a good or bad character in "Hunters" because they are all people who have no choice but to follow their circumstances. 10: Do you see Dae-gil as someone who became who he was because of the historical circumstance he was in?
Jang: My favorite fictional character is Choi Dae-chi from [1991 MBC epic drama] "Eyes of Dawn" and his life completely changed due to the historical circumstance he was in. If Japan had not annexed Korea, if he had not been drafted to the military, if he had not met Yoon Yeo-ok who was one of the Japanese army's comfort women, he would not have turned into a North Korean partisan. This man has no ideology but he had to belong to some organization while he was alive and happened to gain a following. It is the same with Dae-gil. Tae-ha is fighting for a political cause. And slaves unite and learn the ideology of 'the world of slaves' in order to survive. But slave hunters have no ideology. They live their lives by the day by catching a slave and Dae-gil will keep searching for Eon-nyeon. And he has become an animal-like slave hunter in order to survive and the best one too. He could have gotten stabbed to death in a village somewhere if he hadn't found Eon-nyeon.

10: But Dae-gil is too complex a character to just say that he lives according to the flow of the times. In "Hunters", you could describe Tae-ha as a straight arrow and Wang-son as frivolous, but you can't define Dae-gil with just a couple of words. He is the lowliest of the low yet innocent when it comes to love, and he is imprudent yet also serious.
Jang: Dae-gil was born an aristocrat but lives amongst the commoners so that is why he is a character likely to develop an ideology regarding equality. I play Dae-gil based on this feeling. And Dae-gil has tried his utmost to survive after becoming a commoner. Even the son of the deceased eats food when he gets hungry, so you can only imagine how hard of a time Dae-gil would have. On most days, he would have been making a living while on some days, he could have laughed and talked about the old days. That's why I think Dae-gil's unique characteristics are expressed through my experiences from everyday life and my mentality.

10: And what are those characteristics, do you think?
Jang: For example, the character Chun Ji-ho is really cruel. He is able to call his subordinates in a composed voice right after killing someone. Dae-gil may be better at killing people but he is not someone with that kind of character. He is a slave hunter who captures slaves, but sometimes also helps slaves. And it's not because he is nice but because on some days, he is in a good mood and is reminded of the old days. If he wasn't feeling well on that day he might not have saved them. There is also a noble side left to him so he is clinging onto the last piece of wild animalistic nature he has. I don't have a fixed concept for my character -- I just try to go with the feelings he would feel within his circumstances in his kind of life.

10: Your character's way of speech seems to change depending on his circumstance. You speak with a certain rhythm when you're with other slave hunters.
Jang: That is something I attempted at from permission of the director and the writer. Because I think it's the right thing to do if I could bring my character to life. When Dae-gil was a nobleman, he used to speak indirectly. When his father asked him if there was a girl he liked, he would say "No. There is no such woman" but quietly hoped that his father would notice. On the other hand, [the slave hunter] Dae-gil uses a direct form of speech because that is the only way he can survive. And there are many instances where he will get into an argument while going through all kinds of things. So if I cut in when somebody is saying something important, I can control the other person because he can't talk anymore. I need to ride a certain rhythm in order to do that. But what I care more about than my acting or speech is the eyes. Dae-gil's eyes are always unfocused. He looks at things with a different perspective unless it is something important. He lives hiding his emotions and restraining himself like that.

10: I think that is why Dae-gil looks sad. He seems like someone who has given up on dreams and hopes, and volunteers to live life in a numb state.
Jang: In that respect, my experience of appearing in the film "Maybe" helped a lot in understanding Dae-gil. In that film, my character has a rare disease so there was nothing strange about him dying the next day and thus he seemed unpredictable to other people. Other would think it is a misfortune but he has always lived that way, so for him, yesterday is today and tomorrow is today as well. You cannot put any obligations on the world and you can't really put one on Dae-gil either. He goes out to find Eon-nyeon today and will go out tomorrow too. I think that is the purity of Lee Dae-gil. Not that he is a good or bad person, he is just pure.

10: In that sense, Dae-gil has a strange child-like side to himself. When it comes to his work, he makes clear judgments about the situation even when he gets shot by a gun. But in other respects, Choi Jan-goon is much more like an adult.
Jang: That is right. Dae-gil is the leader in terms of work, but Choi Jang-goon is the mental leader. And it is only when Dae-gil has such personality that Choi Jang-goon and Wang-son can each have his own spectrum. It is important to have a feeling of all the different characters mingling with one another. And the saddest part about playing Dae-gil was the scene in the first episode where he sees the drawing of Eon-nyeon by artist Kang. He is drawing a profile sketch of her and it has to be exactly the same as how she looked ten years ago. She has to be a kid, looking exactly the same as Dae-gil last saw her. And even though he doesn't know what do to when he catches the girl, he still loves looking at the drawings. So he carries the picture around and gets another one drawn when it gets old. There is a part of Dae-gil that is consumed with the memories of when he used to a nobleman.

10: Then can Dae-gil go on to the next phase after he catches Eon-nyeon? It seems like Dae-gil's life has stopped at the point when he parted with Eon-nyeon.
Jang: That is a little different. In my perspective, I think "Hunters" is a drama about Lee Dae-gil growing up. People keep growing even when they become adults, but in Dae-gil's case, I see it as a growth in the way he communicates. Dae-gil is still immature and cannot communicate well with others, but I think he is changing, little by little, by interacting with Tae-ha and many other people. The way he changes isn't like he is simply desolate, sad or sick but all the emotions get built up. So I think Dae-gil is gradually changing, little by little.

10: In order to dig deep into the inner aspects of your character like that, it must be essential to analyze the times that he is living in. How did you prepare for that?
Jang: I read the information with the basic stuff. Like when I did the [SBS historical drama] "Great Ambition", I had studied about the currency and old merchants during that time in order to play a merchant. You have known about such things if you want to improvise. The historical period in "Hunters" is when the Ming Dynasty changes to the Qing Dynasty, and so no wonder it is confusing. From the noblemen's perspective, they had to have people like the slave hunters because slave, who were like their real estate property, kept running away. The slave hunters were sort of like hired soldiers or detectives during that time. They chase after the footsteps and fight when it is necessary. 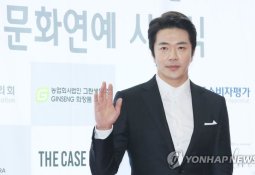