Yoo, who won the same title yesterday at MBC, was so nervous and ecstatic that he could not carry on with his speech. "I don't know how to express my gratitude," said Yoo in his acceptance speech. "This is too big of an award for me. I won a big award yesterday and I don't know if I should keep receiving these awards. Thank you so much, I can't think of what to say. Can Hyori go first?"

Singer Hyori shared her thoughts in front of the mic. "I'm a singer but I think they gave me this award because I didn't win last year and they want me to keep working hard."

She then went on to finish her acceptance speech for the People's Choice award. "I always feel like I'm not good enough. I want to be entertaining but when I can't think of any ideas, Yoo Jae-seok encourages me and gives me strength." The two stars - who appear together in popular variety show "Family Outing" - were both ecstatic and emotional over their win. Yoo suggested to Lee that they wrap up the ceremony by dancing together, which Lee eagerly accepted.

Television personality Boom, who is currently serving in the military, showed up at the event while on a special leave from service. He commented that he misses his family and girlfriend. 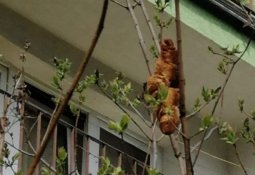