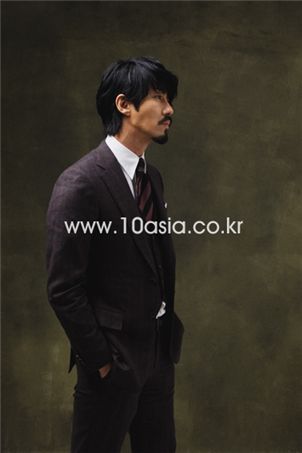 썝蹂몃낫湲 븘씠肄
10: Isn't it also possible to eat a lot and then workout to bulk up your muscles? Or do you try to slim down your body to bring out your muscles more?
Cha: An actor's body shouldn't be too bulky. It will make him look awkward and also make him move awkwardly. I'm not an athlete. And my face will also gain fat along with my body. It won't look great. I'm someone who really likes slim body types. And I'm talking about skinny. Like Jeremy Irons.

10: Like fatally thin?
Cha: I like it and it's what I aim for. But I'm not as thin as I would like to be. My forearms and thighs are really thick. (laugh) I workout because I don't like to gain weight but that is what is creating the muscles. I actually likes bodies that can stay thin even if you don't workout a lot. But I have so much muscle now that I don't think I'll get any thinner even with age. 10: It seems that you're the type which won't do a loose job of whatever you do. It's as if you are trying to show your best.
Cha: Whatever I do, I don't want to just stand there gaping. Working alone has become a habit for me so I can't stand not being busy. Some people ask me if it isn't better just staying put quietly but that is actually rather uncomfortable for me. I have to be able to tell myself for sure that I'm working hard. No, I can't just work hard at it, I have to be good at it. I think one should know how to be responsible for their actions. Whether it be for work or anything else.

10: You're a very professional person so it seems you would not like it if the other is not.
Cha: Nah, that's not true. That's different. That is that person's personal disposition. There's nothing I can do about it. I don't think 'Oh, what's wrong with him' or 'He lacks in this and that'. I just tell myself that he's different from me.

10: Really? People who take good care of themselves have high standards so I think it would be tiring for those around them.
Cha: I can get tiresome for some people at times. When it's related to me. Before, I used to be able to compromise with others even if I didn't agree on something. But I don't do that anymore. Once you start to compromise, the damage comes back to me. That's what I've realized so these days, I just say what I want to say right away even if the response isn't great. I'm not pretending to be more knowledgeable -- I've just really had a lot of experience so I'll the other person several things they shouldn't do. Especially on matters which I know will never work out but the other person keeps insisting on. 10: Like you say, you've worked for a long time and a lot in this industry. But it doesn't feel that way. Your image is different from when you were in your 20s.
Cha: I look better now. I actually looked older back then.

10: Are there any aspects of you that have matured on the inside compared to when you were in your 20s?
Cha: I used to not be able to accept different opinions at all but I now know how to accept differences. And I've been talking a lot about director Lee Jun-ik who I've been working with recently to shoot his new film. I realize I should become even better when I look at him. He's extremely strict on himself although he doesn't show it. There are so many people who don't try to look at what they themselves do wrong but keep criticizing others. So while Lee does a lot of reflecting on himself internally, externally he gives off the vibe that there are some loose ends to him so the people around him will try to fill in the aspects he seems to lack in which he will absorb completely. I feel that he is on a different level as me and that I should become like him when I grow older.

10: Do you hope to age more handsomely?
Cha: That's my dream. And hopefully in a way that I don't seem greedy. Take Audrey Hepburn and Elizabeth Taylor, for example. They were both the best actresses during the same time period but while one of them passed away after aging beautifully, the other tried so hard not to age and see how she looks now. I don't want to show myself aging like the latter.

10: How do you think you would achieve that as an actor?
Cha: My conclusion these days is that I should look at the roles I have played, choose the ones I do well at and enjoy playing, and continuously challenge myself by developing on such roles. [I will] Expand on my life experiences while add more depth to my acting.