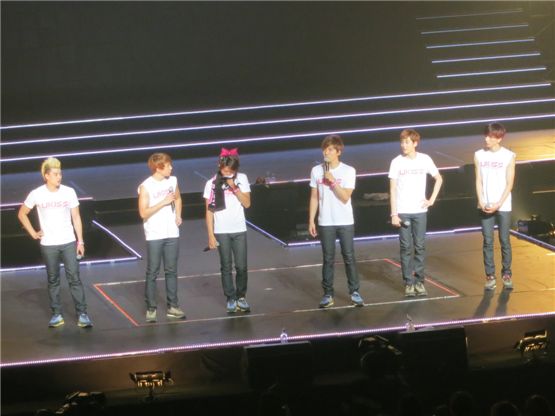 U-Kiss members Eli (left), Hoon (second to left), Dong-ho (third to left), Soohyun (third to right), Kevin (second to right) and Ki-seop (right) speak to their fans at the final stop of their exclusive Japan concert at the Budokan in Tokyo on September 5, 2012. [NH Media]

Korean boy band U-Kiss wrapped up their exclusive Japan tour this week, performing in front of some 10,000 fans at the prestigious Budokan in Tokyo.

For a total of three hours, fans enjoyed U-Kiss' performance of their hit Korean songs such as "Shut Up," "Manmanhani," "Round and Round" and "Believe" as well as their Japanese hits "Tick Tack," "A Shared Dream" and "Dear My Friend." Meanwhile, U-Kiss member AJ, who is currently taking a break from his group activities to focus on his studies at Columbia University, surprised fans with a video message.

Aside from their powerful group numbers, the members graced the large-scale stage for individual performances as well.

U-Kiss is now gearing up to make their comeback to the local music scene with their seventh mini-album "STOP GIRL," which will hit stores on September 20. 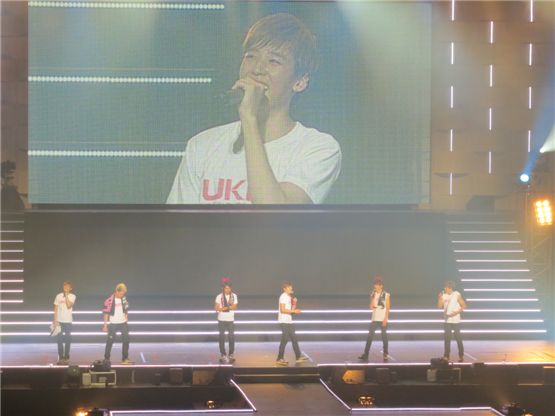 U-Kiss members Kevin (left), Eli (second to left), Dongho (third to left), Soohyun (third to right), Ki-seop (second to right) and Hoon (right) speak to their fans at the final stop of their exclusive Japan concert at the Budokan in Tokyo on September 5, 2012. [NH Media]