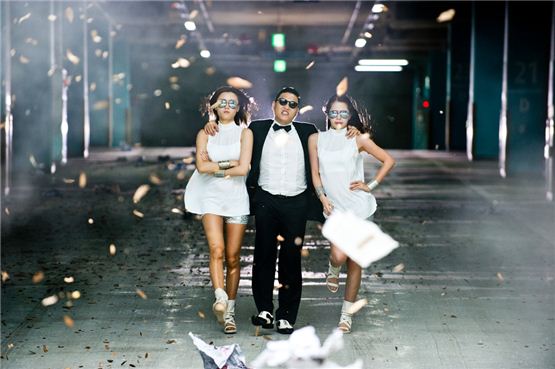 PSY walks out from a parking lot with his female backdancers in the music video for "Gangnam Style," the title song of his sixth studio album "Six Rules, Pt. 1" released on July 15, 2012. [YG Entertainment]

썝蹂몃낫湲 븘씠肄
Korean artist PSY’s “Gangnam Style” sees a big chance of becoming one of the most favorite tunes of the year with its ever-growing popularity overseas.

PSY became the first Korean musician to top Apple's iTunes’ music video chart with his eye-popping video of his title track “Gangnam Style” for several hours on August 21, edging out top-class pop stars including Justin Bieber, Katy Perry, Maroon 5, and Nicki Minaj. Packaged with full-of-humor moments that appeal to people from different cultural backgrounds, the four-minute clips literally swept the world since its release on July 15, hitting over 42 million views on YouTube at 6 pm KST today.

The video has also been receiving a flood responses abroad after being mentioned by international celebrities online and American news outlets’ coverage, such as The Huffington Post, CNN, The Wall Street Journal and Time.

Meanwhile, the singer was spotted on YouTube grooving to his signature horse dance for "Gangnam Style" in response to some 50,000 people cheering him along at the Dodger Stadium in Los Angeles, California on Tuesday.
※ Any copying, republication or redistribution of 10Asia's content is expressly prohibited without prior consent of 10Asia. Copyright infringement is subject to criminal and civil penalties.