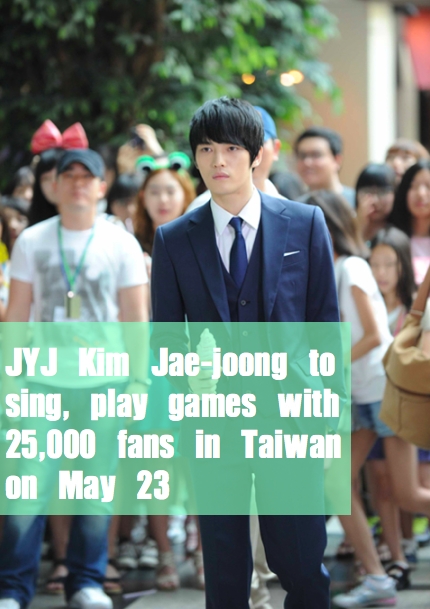 JYJ Kim Jae-joong has been slated to hold his solo fan meeting in Taiwan next month, according to his agency C-JeS Entertainment on Monday.

The announced meet-and-greet, dubbed “2012 KIM JAE JOONG FANMEETING IN TAIPEI,” will be joined by some 25,000 fans at the ATT Hall in Taipei on May 23, the statement said.

At the forthcoming event, Kim will reveal what he has been doing recently and memorable episodes that happened during his TV series "Protect the Boss" shooting.

With "Protect the Boss" becoming a huge hit in the country, he also plans to sing “I'll Protect You” off the TV series’ soundtrack and play games with the local fans.

“Kim’s series that aired on Taiwan’s GTV last month has been so popular that the broadcaster and the show’s distributors are currently in negotiation to re-air the drama soon,” a local promoter was quoted as saying. The firm added that further announcement regarding ticketing information and the show will be informed on a later date through Kim’s official website and Taiwanese ticketing websites.

Aiming to strengthen his foothold in acting, Kim is prepping up for two projects so far this year: a TV series and a movie.

Taming up with Hallyu actor Song Seung-heon and KBS' "SungKyunKwan Scandal" queen Park Min-young, he is in the middle of shooting the forthcoming TV series "Timeslip Dr. Jin" (tentative title) set to air on May 26.

For the big screen, Kim will be playing a top singer in Korea with actress Song Ji-hyo in comedy “The Jackal is Coming” and the leading actors have already finished the script reading session, according to the firms officials' announcement last week.